This is the second novel in Chris Orcutt’s series about us. It’s available in print, and for Kindle and other ebook platforms.

What is The Rich Are Different about?
Rather than try to outdo how Chris Orcutt describes the novel, here is a snippet from his own synopsis:

“The Rich Are Different, the second novel in Chris Orcutt’s Dakota Stevens mystery series, explores the rarefied world of a Long Island heiress and her murdered brother who owned an Old West resort in Montana. Going undercover as actors in a make-believe mining town straight out of 1885, Dakota and his associate, Svetlana Krüsh, hunt down the man’s killers, discovering a mother lode of a motive in the process. 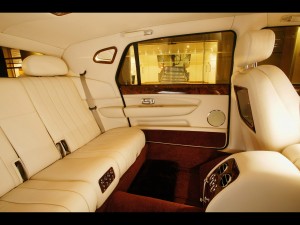 The car in which we were “summoned.”

How true is The Rich Are Different to your actual case?
Well, the facts are the same, but once again Orcutt does glamorize our work a bit. For example, we were never whisked away in a suspect’s Learjet. But we did get summoned by our client, as he describes well at the beginning of the novel, and we were driven to her Long Island estate in a Bentley Arnage T. (That was an incredibly comfortable automobile ride.)

Where can I get the book?
Check out the links on the sidebar to the right.

A Study in Crimson, a prequel and the 5th installment in the critically acclaimed Dakota Stevens Mystery Series, shows a younger, devil-may-care Dakota at his charming, witty, and resourceful best.

Despite having thrown off the shackles of the FBI, Dakota is forced by the Director of the FBI to go undercover at an Ivy League university. His task? To rescue a college coed from the clutches of a Svengali-like sex researcher. Before they took down global conspiracies… See New York PI Dakota Stevens and his brilliant associate Svetlana Krüsh in three of their early cases.

Dakota Stevens returns with “Watson” Svetlana Krüsh in an exciting new case. What begins as the search for a bestselling author soon takes a turn for the worst. For the first time in his career, it’s personal…

Get the 2nd novel in the Dakota Stevens Mystery Series. The detective duo of Dakota Stevens & Svetlana Krüsh are back in this highly anticipated sequel to A Real Piece of Work !

"Dakota Stevens is thoroughly likable and appealing with his rich mix of chivalry and clever mischief (5 stars)." — IndieReader

Get the 1st novel in the Dakota Stevens Mystery Series—the mystery novel that has readers raving! Over 125 5-star reviews!

"Action, lust, danger, style and witty repartee, Orcutt's A Real Piece of Work is a work of art (5 stars)." — IndieReader

“Stylishly written—nods to the classics of the detective genre—with great characters and plenty of wit and originality (5 stars).” — National Bestselling Author Dave King

This website and its contents are ©2018, 2019 Chris Orcutt. All rights reserved.